ARC UK and Argent Related – Working with a creative genius to visually transform a project perimeter into a stunning work of art! 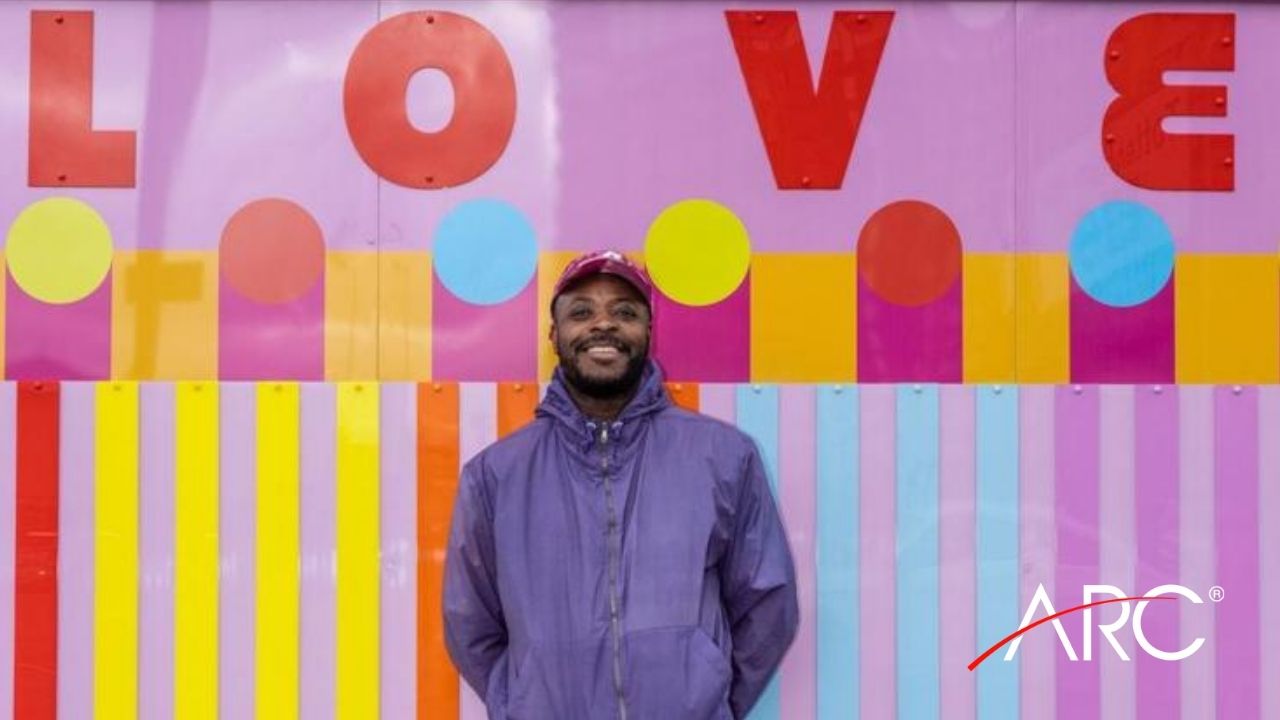 Yinka is renowned for specialising in highly distinguishable visual storytelling, with dazzling infusions of effervescent colours, resulting in dramatic transformations of urban landscapes and a myriad of various indoor and outdoor spaces.

Such has been the impact of Yinka’s colourful brilliance, and inspirational messaging; the local community and passers-by are now embracing this enormous project with a sense of pride – instead of viewing it as an inconvenient eyesore, which should be avoided at all costs.

“AS YOU PASS ME BY, KNOW THAT IT IS NOTHING BUT LOVE FROM ME” Yinka Ilori

We are so proud to be so intrinsically involved in a major project of this significance, and strategic importance, which is clearly making such an impactful visual difference to an entire area of one of the world’s most iconic, vibrant, and inspirational cities.

The scope of works involved reflect a supreme team effort, which involved the creation of print ready artwork by our design team; the printing of 100 aluminium composite hoarding panels; 340 individually modelled Perspex slats with associated LED lighting – all delivered and installed on site by our experienced team of national fitting experts.

Logistically, this was obviously an enormous challenge because of the necessity to limit any inconvenience caused to residents, and passers-by, whilst also continually fielding questions about the design, print and application processes involved in creating a 56 metre long - variable gradient -  work of art!

ARC’s Installation Manager - Damon Webb - was unsurprised by the level of interest the hoarding panels generated and admitted he has never been involved in such a deeply satisfying project; primarily because he and his team could see the enormous impact the installation was having on people as Yinka’s design creation gradually evolved over a period of 6 days.

ARC’s project manager and relationship lead on this project – Josh Davies – is also deeply immersed in two of Argent and Argent Related’s other major regeneration projects – King’s Cross and Brent Cross Town; however, this particular phase of Tottenham Hale’s transformation has been a distinctive experience for him because of its unquestionable uniqueness:

“I openly admit that I’ve been living and breathing this particular project, for the past 4 months, and feel an enormous sense of fulfilment and pride in what has been achieved by the entire team involved.

I absolutely love working with the Argent Related Team, because they are so full of stimulating inventiveness, and it was a great experience meeting Yinka because he is such a brilliant guy… and so unassuming for someone with such enormous talent and vision.

What we have done is translate Yinka’s amazing designs and created what essentially amounts to the most colourful and inventive building site hoarding I’m sure anyone has ever seen.

To be so heavily involved in something, which is clearly making a positive difference to Londoner’s day to day living experience, has been unbelievably gratifying and I’m incredibly excited by what is around the corner for these projects because the ideas, emanating from the Argent team, are simply incredible.

What Yinka, Argent Related, and ARC have done is essentially translated Creative Genius into the most sublime project site perimeter in London… and maybe anywhere on the planet!”

View our back to School Safety Catalogue